When on vacation it is fun to try something new and create an experience like you have never had before. If you were offered the chance to explore the nation’s most completely restored WWII submarine, stroll through the streets of a 19th century shipbuilding town and sail a boat down the river . . . all in one day! . . . Would you do it?

There is a place within an hour’s drive of Hidden Serenity Bed and Breakfast that provides all of this entertainment. . . and much more.

Are you intrigued yet?

In Manitowoc resides the Wisconsin Maritime Museum. Here you will experience exhibits, hands-on learning programs, submarine experiences as well as many special events throughout the year.

Did you know that 28 submarines were built in Manitowoc during World War II? Although USS Cobia is not one of the 28 submarines built in Wisconsin, she is a National Historic Landmark and an International Submariners Memorial. For more than 40 years Cobia has been a fitting memorial to the thousands of men and women who built submarines and the brave men who served on them.

The USS Cobia is the most intact World War II Submarine in the nation and is home to the oldest working radar in the world. At the WI Maritime Museum you can take a 45-minute guided tour that will teach you how submarines operate and what life was like aboard a “pig boat” with 79 other men. While touring this fully restored WWII submarine from top to bottom you will get a feel for life aboard a sub. See the bunks where men slept above torpedoes, learn why most of the crew showered with their clothes on and hear why submariners were the best fed members of the military.

A great compliment to the tour of the USS Cobia is the museum’s exhibit, “USS Cobia: Below the Surface”. The interactive exhibits, simulator, and theater will help you learn about  Cobia‘s six war patrols, the important role that US Navy submarines played in World War II, and how Manitowoc came to build 28 submarines during the war. You can pick a crew card to learn about the life of a particular crew member and find out where he worked aboard Cobia. You can look through the periscope of a Manitowoc-built submarine and see the inner workings of a Mark 14 torpedo in the USS Rasher Concourse before stepping onboard Cobia.

While at the museum be sure not to miss the “Nook & Cranny Tours” of the USS Cobia. These smaller tours will last approximately two to three hours and will give guests a chance to see areas of the submarine not seen on normal tours. (This tour does include ladders and smaller spaces and you must be 16 or older to participate) A free bottle of Torpedo Juice (non-alcoholic) is included for a mid-tour break in the Crew’s Mess. (Space is limited so reservations are required)

After touring the USS Cobia, you can explore the streets of old Manitowoc where shipbuilders, sailors and traders walked more than 150 years ago. You will step back in time to the 1840s and learn how shipbuilding and shipping were some of the first industries in the newly-formed state of Wisconsin. Imagine buying a ticket at Goodrich Transportation Co. and traveling on the whaleback steamer Christopher Columbus.  Peer into a replica cross-section of the schooner Clipper City and learn how Wisconsin shipyards contributed to our nation’s growth during the 20th century and its defense during World War II by building ships and submarines in Manitowoc and northeastern Wisconsin.

Other popular exhibits at the museum are the model ship gallery and car ferry exhibits. Scale models, half-hull models and quarter boards tell of Great Lakes sailing ships and freighters, past and present, in the Model Ship Gallery. Learn about Lake Michigan car ferries such as City of Midland 41 and City of Saginaw 31. These unique ships transported passengers and railroad cars between Michigan and Wisconsin ports year ’round, through storms and heavy ice. View a shipwreck diorama featuring the Edmund Fitzgerald as she looks lying deep in the waters of Lake Superior.

A must-see exhibit is the Wisconsin-built boat gallery. Wisconsin boat builders have a tradition of craftsmanship that goes back 150 years. In this exhibit, you will get a close-up view of actual boats that helped build that tradition. The 44-foot luxury yacht Lady Isabel, built in 1907 by Burger Boat, and 33-foot Palmer-Johnson sailboat Skybird, built in 1947, highlight the collection that also features many examples of Wisconsin-built boats, outboard motors and hunting craft used for pleasure and sport throughout the Great Lakes region.

Your day at the museum will be one to be remembered and, afterwards, you can return to your room at Hidden Serenity Bed & Breakfast where we pay close attention to the details and unique amenities need to make your stay as special as possible. You can share your newly made memories over a delicious gourmet breakfast overlooking the woods. The perfect ending to a perfect getaway.

View Our Rooms
View Our Spa 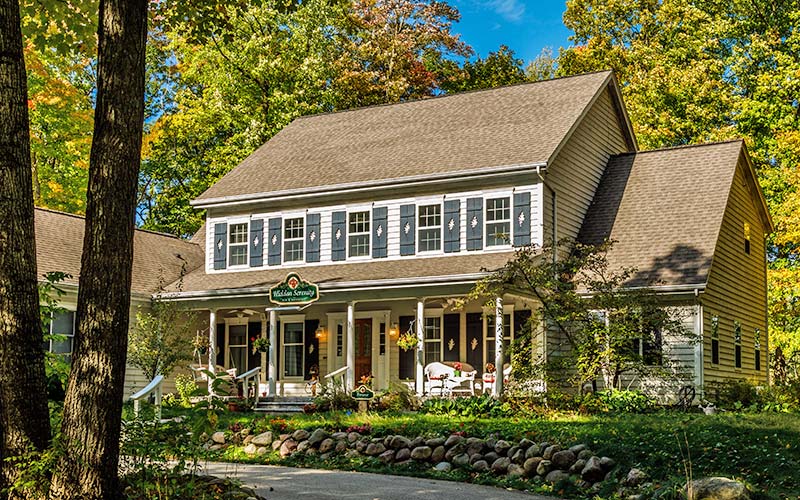